This travelling exhibition tells the moving stories of the brave actions of five South Australians awarded the Victoria Cross (VC) and George Cross (GC) in the Second World War and the Vietnam War.

Gallantry tells the history of both awards, a background to South Australia and both the Second World War and the Vietnam War; and the stories of the five recipients: Peter Badcoe VC; Thomas Currie (Diver) Derrick VC; George Gosse GC; William (Bill) Kibby VC; and Lionel Matthews GC.

The exhibition comprises five double-sided pull-up banners.  The framed replica medals and citations of each man are also included. These come stored in three wooden crates which then double as plinths for their display.  Images of the 5 double-sided pull-up banners can be seen here.  Images of the launch of the exhibition at the Adelaide City Library in 2014 can be seen here. 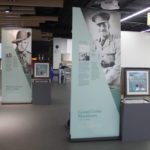