The Great War at Home

This display shines a light on the experiences of South Australians during the First World War with a special focus on the home front activities. It brings this period of history to life with South Australian-specific information and stories, particularly concentrating on the work of women and children but also highlighting the work done by men too old or too young to enlist, and the battles that returned soldiers found themselves fighting at home.

The Great War at Home covers the following themes: South Australians on the Eve of War; Mobilisation on the Homefront; Men and the Homefront; Continuing Work after Troops came Home; and Stories and Profiles of various key individuals who were left ‘Holding the Fort’. It was produced in 2017 and supported by the Anzac Day Commemoration Fund. 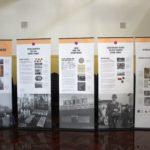