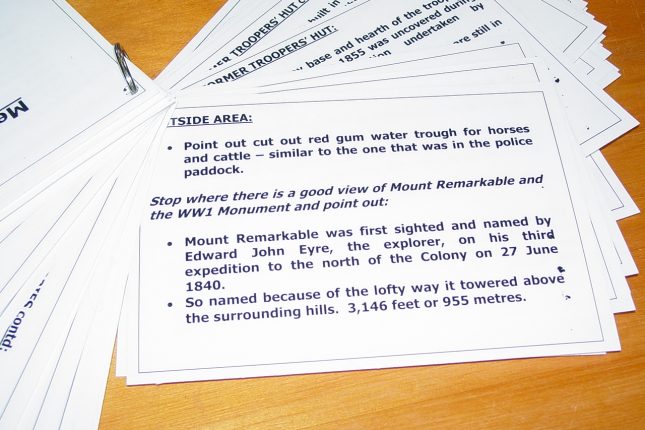 Concise and clear: Use short sentences, familiar words and avoid jargon. When it is necessary to include unfamiliar words, explain what they mean. Aim for text that is engaging, clear and easy to read and comprehend.

Use active rather than passive voice: Active voice is more direct and has more impact. Instead of “The town changed as a result of the bushfire” say “The bushfire changed the town”.

Catchy Titles: Use catchy titles on panel headings to grab attention. Use titles to break-up longer sections of text into manageable chunks for the reader.

Audience: Use language and style that is accessible and understandable for all manner of audiences.

Direct and emotive: Get to the point. Make sure the first sentence in a paragraph is important or dramatic. Use simple sentences without too many qualifying phrases. Read text aloud to see how it ‘sounds’. Instead of: “The town, due to the drought, which had continued for many years in this region, slowly reduced in its population” – Try a shorter, more vivid style: “The drought continued”.

The population slipped away with each scorching year…Balance being creative, with using shorter, more familiar words. Rather than saying “Nevertheless the magnitude of the undertaking precluded it being completed swiftly” … Say it more simply: “The size of the project meant it took time to complete”.

Interactivity and posing questions: Ask questions and tell stories that provoke a how would you feel if this happened to you response.

Respect and sensitivity: Text should be friendly and conversational. Use acceptable, non-derogatory language and expressions. Consider double meanings and implications.

Control and choice: Influence what is read with clever use of titles and by using text to direct readers to move on to the bit you would like them to read next.

Captions: Use captions to tell more of the story, not just to state what people can see. Consider what ‘main text’ could instead be turned into image captions. Restrict captions for images/other graphics to 20 – 30 words.

Editing: Edit, edit and edit again to gradually shorten and shape text. It is very useful to have someone unfamiliar with the content of the sign to be involved in the editing process.